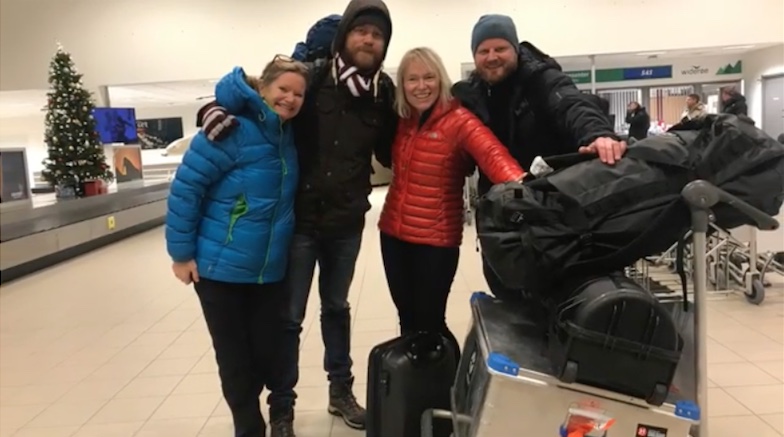 Just before citizens of the world rang in 2019, Hilde and Sunniva met up in Hilde’s hometown of Longyearbyen, Svalbard. Planning for a remote 9 –month Expedition is a complex web of tasks, lists, calls, emails and follow- through. Whatever time we can spend together is invaluable. It’s also a smart move since we are going to be spending a loooong time together in a small space- getting along would be absolutely necessary. To spice things up I bought Hilde a pair of Everlast boxing gloves for those “off days” at Bamsebu. I bought myself a pair too, the perfect way to get exercise and release frustration.

Here is a snapshot of what we managed to do in under 4 days. Oh, I should add that the documentary film team of Halvor Mykleby and Sven Arild Storberget followed and filmed most all of it – that is all four of us in the airport in the pic above – so excited to get started! And then there was the fact that my luggage did not arrive until a few days before I had to leave. It’s all training, right? Letting go of what we cannot control! ?

We also went to the training center to get in a few workouts which were much needed.   We ended our in-person meetings with the Int’l Director of the Norwegian Polar Institute and our Advisory Board Member- Kim Holmen. As it turns out our meeting with him was on the 3 year anniversary of a devastating avalanche in Longyearbyen when heavy snows and high winds in a short period of time all collided to make for the “perfect storm” Dec 19th2015.

Below is a fact-finding Q & A with Hilde and Kim Holmen on the subject of the changing climate in the Arctic.

Hilde: Is it true that there has been temperature increases in subsequent 92 months on Svalbard and that the average temperature has increased by almost 4 degrees?

Hilde: Less ice on the fjords and more ice on land. At the turn of the 1900 century and the beginning of the 2000 ice in the fjords froze and we were always iced in during wintertime. Now it is more and more common that it does not ice up, but that we get a lot of ice cover on land, is this a trend?

Kim Holmen: Yes. The temperature in the water has increased, especially on the west coast of Spitsbergen so the fjords no longer freeze along the west coast. See this link : http://www.mosj.no/no/klima/hav/temperatur-salinitet-framstredet.htmland in particular the temperature development in the Gulfstream from the south. And yes, more ice on land. More rain during winter. This link for data is new : http://www.mosj.no/no/klima/land/

Hilde: Glaciers retreat to a greater extent than a normal cycle may indicate? T he sea maps are no longer correct. Monacobreen has retreated more than 5 kilometres in the fjord.

Hilde: The place was called Arctic «Desert» when I came to Svalbard in 1995. Now it rains both summer and winter and we find that rivers go up in the middle of winter and more snow and that avalanches have taken houses and that landslides become more common.

Kim Holmen: Svalbard has always been the most humid place in the Arctic. There are big differences in precipitation on the west coast an the east coast of Svalbard. Yes, more rain (and more often during winter) Galciers are increasing at lower altitudes, but more rain/snow gives more snow to the higher part of the glacier (above 400 meters) – and more humidity in the warm atmosphere.

Hilde: Grass in the city. There used to only be grass behind the old Barn/museum and in the sewer leak below Blåmyra and under bird cliffs. Now it’s green all over the place..?

Kim Holmen: We do see changes in the vegetation. We do not have alot of data yet, but we can see that vegetation responds to warmer and more humid environments.

Hilde: More extreme weather? There was a lot of weather in the winters but then there was wind and cold. Now I find that there are more rain and great temperature fluctuations almost from day to day

Kim Holmen: The Arctic is not simple. There have always been great variations in short term. We do have data that shows more occasions of increased degrees during winter. Before we maybe had one big rainfall every 5th year. Now we see several incidents of heavy rain every winter.

On behalf of the Hearts in the Ice team – we extend our profound thanks and gratitude to the following sponsors that have pledged financial sponsorship and science support for the expedition!

Lastly, don’t forget to watch the video montage of our trip!