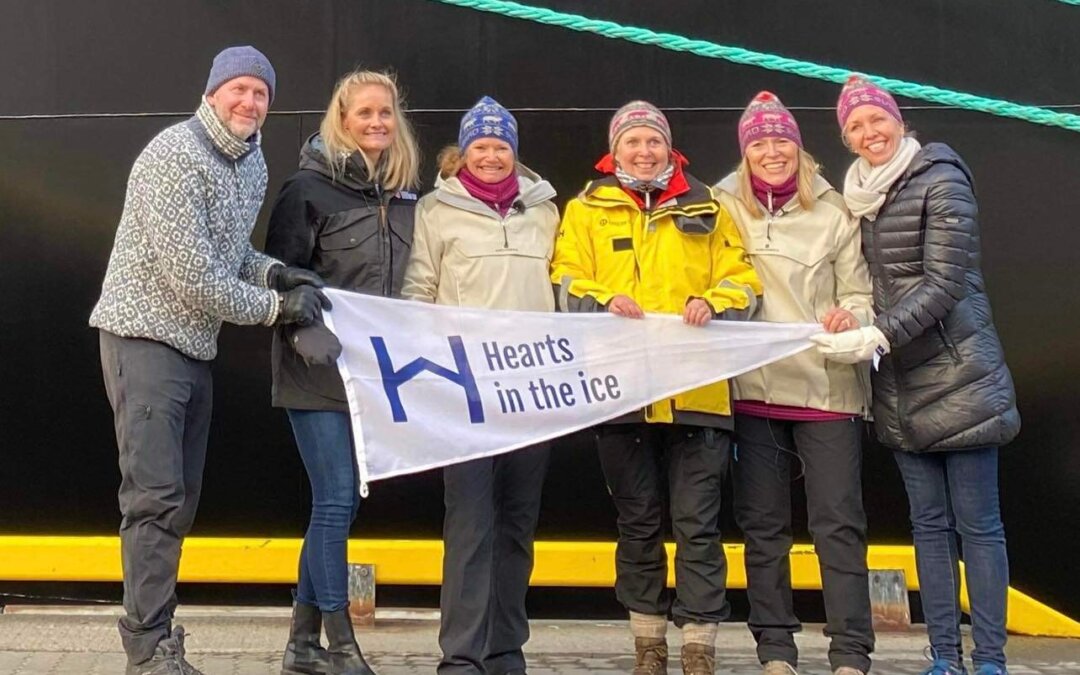 The Hearts in the Ice Team celebrates a 1 year anniversary as Godmothers of Hurtigruten’s Battery Hybrid Arctic Expedition Cruising Ship.

Modern polar explorers Hilde Fålun Strøm and Sunniva Sorby are back in Longyearbyen to mark a sustainable course ahead for expedition cruising and collaboration around climate challenges.

On September 14, 2021, exploration and environmental pioneers Hilde Fålun Strøm and Sunniva Sorby shattered a chunk of Arctic ice on the hull of MS Fridtjof Nansen to honor the 125 th Anniversary of Hurtigruten Expeditions legacy, the world’s largest and leading expedition cruise company. Strøm and Sorby have close to 25 years of experience each in the Polar regions and are fostering a new era of Expedition Cruising as renowned climate and citizen science advocates.

– Hilde and Sunniva’s relationship with and passion for Svalbard and the Arctic run as deep as ours. It‘s only natural that we combine forces and work together to ensure our expeditions stay the most responsible, educational, and sustainable in the adventure travel industry as we vigorously grow and expand as a global company, said Hurtigruten Group CEO Daniel Skjeldam.

– It’s a privilege to be a godmother of one of the world’s most advanced and environmentally friendly cruise ships. Over decades of polar exploration, we have borne witness to significant changes in the High North and the Antarctic. Being the godmothers of MS Fridtjof Nansen gives us a strengthened platform from which to increase global awareness and dialogue around climate change – and to inspire action and engage more ambassadors for nature, stated Strøm and Sorby.

The Hearts in the Ice team have just returned back to Longyearbyen where they hosted an invite only 5-day voyage on board the MS Nordstjernen that included a landing back to the remote trapper’s cabin of Bamsebu where they spent a total of 19 months, located at 78°N; 140 km, with no running water and relying solely on wind and the sun for power, and polar bears for neighbors!

They used the ship as a platform for dialogue, inspiration, engagement and education to share the unique challenges the Arctic is facing. Joining them were family, friends, students, teachers, local government, climate advocates, explorers club members, stakeholders in power and energy, Polar Bears International, journalists and a film team.

The goal was to unite all guests around issues and solutions towards sustainable change. Key stakeholders sat on a panel to discuss opportunities for Svalbard in addition to presentations by staff and guests on glaciers and climate crisis, polar bears, wildlife, history, citizen science and the importance of collaboration to being about action and change.

“Some of our team members have just returned from an expedition organized by Hilde and Sunniva to the fjords and glaciers of Svalbard. Having the chance to hold meaningful conversations and share climate solutions with other passionate people was a truly inspiring experience—one that will help make a difference in bringing about the change we need. The melting glaciers and threatened ecosystem underscored why we are doing all we can to save sea ice and preserve the Arctic as a whole. And by doing so, we’ll not only help polar bears and other wildlife but people too». Krista Wright, Executive Director of Polar Bears International.

– Our aim has been to bridge science and citizen science, and to connect these spheres with NGOs, governments, and the corporate world. People need information and inspiration. We spent time in the polar winter nights to shed light on some critically important questions, such as; how as a world community do we best gather the strength of experts and amateur scientists, industries and other stakeholders, to solve the challenges we face together. Using Hurtigruten ships as a platform is a powerful way to connect people and utilize sustainable tourism as a tool for change, stated Strøm and Sorby. 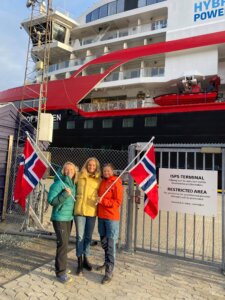