Reflections from 7 days in Cambridge Bay 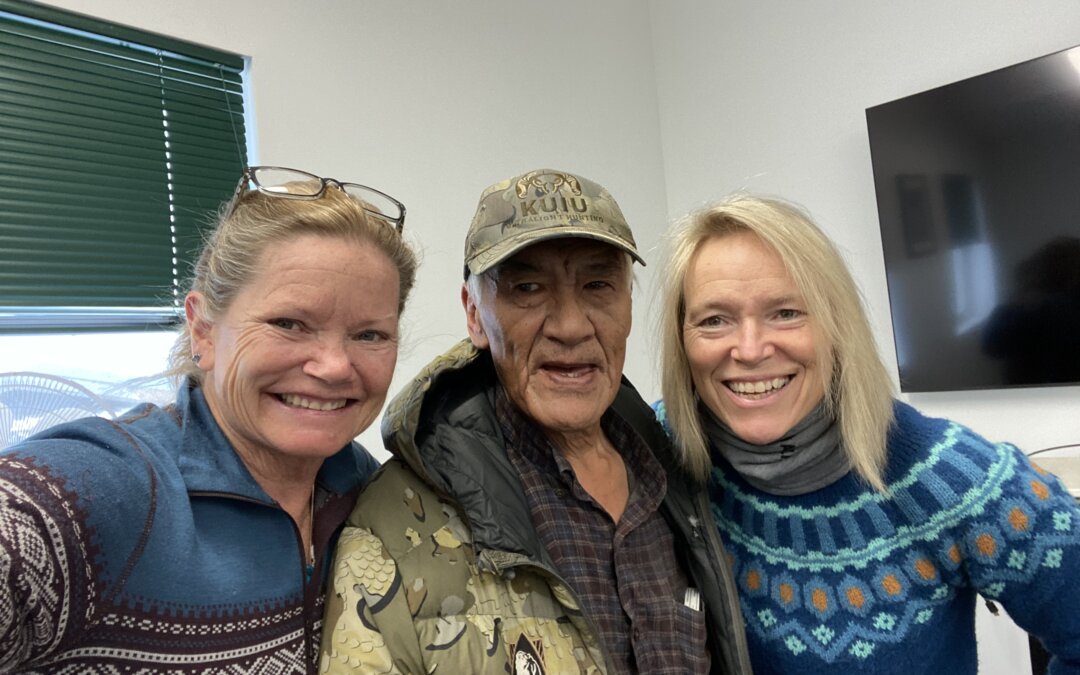 New blog from Cambridge Bay! After our most memorable 5 day-voyage in Svalbard on board the MS Nordstjernen, you can read about the trip here, Hilde and Sunniva ventured south and then west to meet up with their flight to Edmonton, Alberta and then Yellowknife, Northwest Territories, onto Cambridge Bay in Nunavut Canada. Nunavut was officially designated as a territory in 1999 after divisIon from the Northwest Territories.

A homesteader in Hoarfrost River east of Yellowknife

The overnight in Yellowknife was made most special with a visit by Kristin Olesen, family friend of Sunniva’s, a homesteader who has lived North of Reliance on the Hoarfrost River for more than 20 years. She has a story and life that must be told- a true modern day pioneer and lovely soul. Kristin was joined by her friend Karen, a Yellowknife resident who assists new immigrants connect with resources to live and thrive. 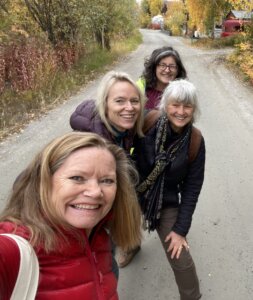 It took a lot to fly across the country, and we will offset the entire voyage with Tomorrow’s Air. Tomorrow’s Air is the world’s first collective of passionate travellers who clean up carbon dioxide from the atmosphere to ensure our air for the future. This reconnaissance trip to Cambridge Bay was an important one as we work to lay the foundation for a future 7-month over-wintering project that will be community based and driven. Elevating the steep decades-rich history of indigenous wisdom and knowledge in alignment with western science- the local stories are powerful and can serve to help us all reconnect to our natural world and recalibrate our compasses. The High arctic is grappling with climate change in a way that is most personal and irreversible. Adaptation and resilience are words often spoken.

Cambridge Bay, with a population of 1750, serves as the Government hub for the High Arctic region known as Kitikmeot – the soul of the Arctic. The combined population of the 5 communities, Kugluktuk, Kugaaruk, Taloyoak, Gjoa Haven and Cambridge Bay, are approx. 7.000.

Norwegian Explorer Roald Amundsen left a legacy in the Kitikmeot region when he sailed through the Northwest passage during his 1903-06 voyage. Some residents trace their bloodlines back to Amundsen as he stayed for 2 years in what is now known as Gjoa Haven. Named after his ship Gjoa.

We landed in the afternoon with a pickup to the Green Row, our lodging for the week. After close to 36 hours of travel- a walk around the settlement was most welcome. Within minutes a vibrant, energetic Millie stopped in front of us. She had such a great spirit and gave us a fabulous welcome to what would be the first of many warm, welcoming encounters from the locals in the community.

A visit to CHARS

Thinking we might rent ATVs for a trip around the hamlet we stopped at Corey Dimitruk who in addition to being a senior community planner runs Cambridge Vehicle rentals – this led to an impromptu  2-hour trip with Corey to see the land and his outlying summer cabin with the brush of cold wind stinging our cheeks.

The next day took us to the 204 million$ federally run Canadian High Arctic research Station, CHARS, which was completed in 2018 and opened in 2019. 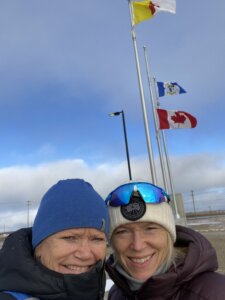 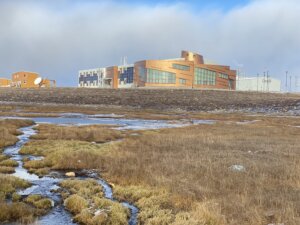 The afternoon found us immersed in the Visitor Centre with an impressive display of artifacts, maps, history, traditional wear and the most knowledgeable Ipeelie Ootoova. It was that afternoon that a seed was planted to have Ipeelie join us as our special guest to kick off the school year with our first educational call Friday Sept 23rd! 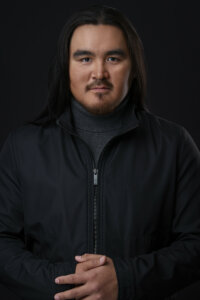 Hearts in the Ice has been fortunate to have such a close dialogue and relationship with Hurtigruten. They run voyages around the world and one important aspect of their journeys is establishing close knit relationships with the locals to engage, support and elevate the guest experience by showcasing local talent, craft and story. We were introduced to Angela Gerbrandt Community Economic Development Office through Hurtigruten, and had a most productive meeting. In her words;

I am a BIG FAN, and I wish all cruise ship companies were as diplomatic and conscientious.

Angela was kind enough to drive us over the Hunters and Trappers Organization where we had a deep dive into Cambridge Bay past and present. Introductions from the locals to the locals are worth gold and we felt so grateful.

Here is an expedition cruise through the Northwest Passage, you can do with Hurtigruten.

The most wise, gentle and humble man, George

We were told that it might be possible for us to meet a well known and respected Elder George Angohaitok, who was out on a seal hunt the day prior. The next day came with a phone call saying that George was at the Hunter & Trappers Organization and could meet with us! We met the kindest, most wise, gentle, humble man in George. The three of us sat across a table that was small enough to grab hands as he quivered sharing stories of his experience at the residential schools.

Tears streamed down our cheeks to which he asked “are you okay?” His stories of being ripped from his home started at the age of 6. He told us about what has been lost, what has changed as the climate warms, the challenges with permafrost altering the terrain – making it unsafe, the longer unpredictable travel times to find seal, muskox and caribou and the almost lost art of making tools, clothing and equipment. The time with George left us deeply solemn with a sense of drive to share George’s stories and to connect those from this welcoming community to our current partners and our broader Hearts in the Ice community. 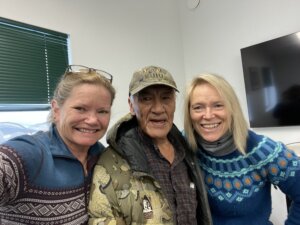 George welcomed the invitation to join Ipeelie, Hilde and Sunniva as they hosted the first school call from Cambridge Bay. Here a link to the recording from the kickoff call in Cambridge Bay.

Before leaving Cambridge Bay the team met with Connie the local high school principal, and Mia Otokiak and Karen Costello (pictured below) from the Nunavut Impact review Board. Karen shared that during Covid she listened exclusively to the radio and read news stories. She read a  CBCNorth Interview with Sunniva and Hilde from Bamsebu and was thrilled to meet in person. You just never know how far a good story can go! 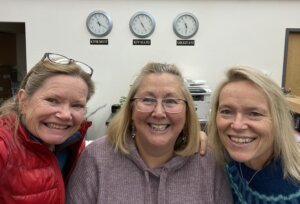 2 days of bad weather hampered plans to depart back to Yellowknife and home to Vancouver Island, BC and Svalbard Norway so the team have been busy working on next steps to realize a Canadian Arctic Expedition Project- please stay tuned!