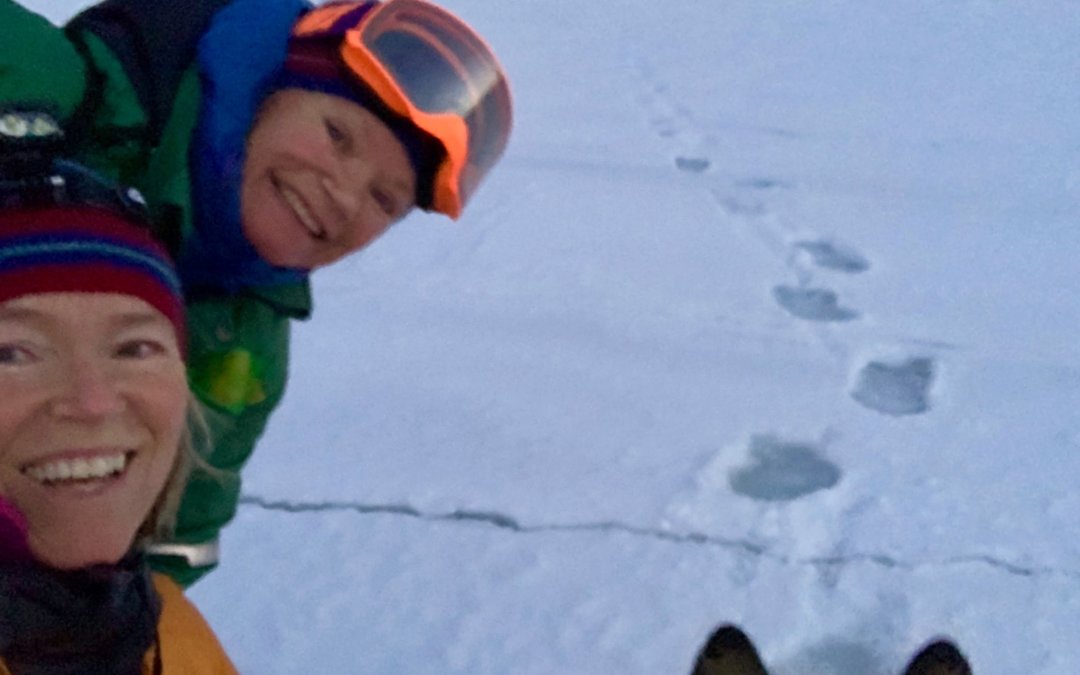 We are less than two months into our Bamsebu overwintering, so it was just a matter of time before we had our first polar bear encounter. What a few days it has been. We have seen two polar bears in 12 hours!

What elevates your heart rate, we ask? Is it running a marathon, eating too much chocolate, skiing 100km/hr down a black diamond ski run, watching Iron Man 2 or having a Polar Bear 6 feet away? Saturday night was defining for Sunniva. She tells:

It was so sudden! I opened the door and 3 seconds later – there she was! My heart was racing! I was on my way outside to close the thick wooden window shutters and turn of the Mission Link Satellite device. I made a few steps forward then went back to turn on the outside light. She appeared from my right where Ettra sleeps, though she was inside. She glanced at me and then pushed off her hind legs and ran down the hill and south towards the fjord. I am awake and alert, always. I hope! Before midnight on Saturday November 9th – I had never been close to a Polar Bear. I will never forget the sight of this massive, majestic, large white marine mammal that stood 6 feet away! I could feel her might!

You cannot help but think of other seconds defined as moments where you were vulnerable. It is inevitable here – we are outside a lot. There is gear, stock piles of wood, barrels of food, a small sauna, a large container of ice, snowmobiles and coolers. All of these are things a polar bear can hide behind. We have several goals here during our stay until May and one of them clearly defined is to live in harmony with the wildlife. This will take vigilance, preparation and forethought every time we are outside! It is a priority.

Hilde and I do almost everything together – it’s safer and more fun! But I had a few times during the day Saturday where I was alone. I went for a run alone with my revolver – just down to the point and back two times. Hilde was working on putting up some more black cardboard insulation outside. We’ve had massive amounts of snow the past 24 hours (thankful for my #OR Gaitors), the snow drifts would have made a run with Ettra too challenging. She hunts while she runs and has such strength when she sniffs out reindeer tracks- she could probably pull me all the way to Longyearbyen with her muscle.

Runs here are not like anywhere else. I am carrying a weapon all the time, eyes darting left to right and I run to the edge of things to make sure the polar bear is not lurking below. Just as the bear ran off – I called to Hilde – she fired a shot with the flare gun – Ettra hated this. A warning to the bear.

Minutes later we traced her tracks outside. She definitely knows we are here and that there is food – her snout left an imprint on the snow sitting atop the big white cooler – our frozen goods inside.

Sunday, we decided to walk towards the west while we still had a few hours of light. There in the distance, about 300 metres away from us was a large polar bear charging off to the north. Clearly he had heard us and we scared it off. We followed the tracks to see if it might have been the same polar bear and roughly which direction it came from. To our huge surprise, we spotted lots of blood and there she lay, a reindeer hunted by a polar bear. Could this be? It was so fresh that it must have been within the past hour or so. 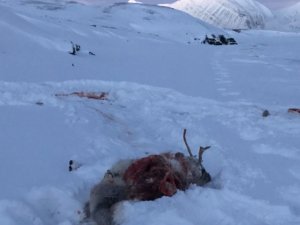 “I have seen this only three times before”, says Hilde “It’s not at all normal that a polar bear hunts on land. Their food source is seal. As recent as last April I saw the same thing. A polar bear had been hiding behind a large boulder, hunted and killed a reindeer.

That same weekend I felt that I was being ‘hunted’ by a female polar bear that came to within 20 metres behind me, before I noticed her. After a peaceful staring contest she made a move and went on. Then found a rock to hide behind and seemed to stare a long time before she went on.

It is possible that this is the Polar Bears way of dealing with climate change. Since the decrease in ice in the fjord there is less of its primary food source. Reindeer is a great alternative but the polar bears need to learn to hunt them. The polar bear we saw run away from its kill had clearly been lying in wait behind a knoll above where the reindeer was. She waited until it was close enough and then slid down the hill- we saw the skid marks. It would not be possible for a polar bear to outrun a reindeer so this method makes sense even though it is disturbing to think of, that we are also being hunted. I admit that even with my over 200 polar bear encounters I feel insecure now that we are going into the dark polar night. When it’s dark it almost impossible to tell a reindeer from a polar bear until it’s close to us. And a difficult polar bear around Bamsebu is not something we need or want.

Børge Damsgård, one of the lead researchers at UNIS commented on our sighting with text message via #IridiumExtreme:
”No, this is actually very rare. We know that a polar bear can eat reindeer but not hunt them. We (science community) have discussed whether or not reindeer can be a new food source for polar bears as a result of climate changes and little ice, less seals but there is so little documented.”

We think this is fascinating – our photos and observations will become helpful for the researchers working to better understand behavior like this, where little is documented.

It is hard not to sleep with your eyes wide open and think “what if”? What if I didn’t turn the light on? We often do not turn the light on so we can see the northern lights. What if she came from the left side of the hut where there would have been more of a face to face confrontation?

We can make ourselves crazy with “what-if’s” and we can visualize every worst case scenario and what we would do. While this helps with situational awareness- nothing really prepares us for the defining moment. So, we stay alert and always, without a glitch, slow down enough to make sure that we move with awareness and safety.