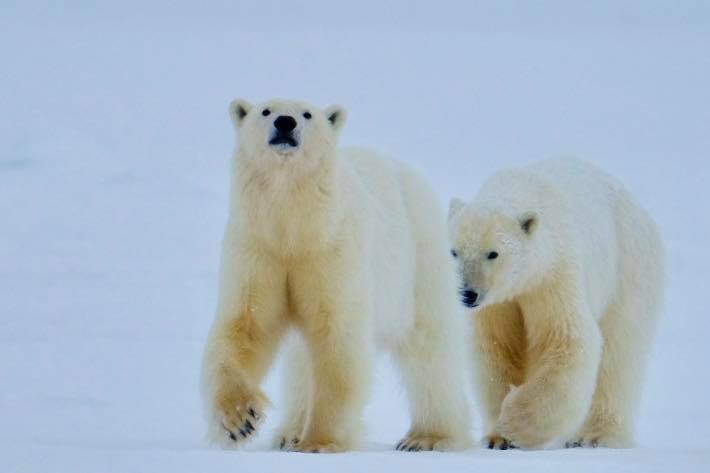 The quest for certainty blocks the search for meaning.
Uncertainty is the very condition to impel man to unfold his powers
– Erich Fromm

Wilderness is the great teacher.
Our Arctic overwintering at Bamsebu has illuminated the depths of who we are; our strengths, vulnerabilities, fears, isolation, loneliness, purpose and all of the lessons learned through hardship. We have deep respect for this precious life we have been given and the beautiful land upon which we dwell. We don’t need a dictionary to define commitment, camaraderie, love, perseverance, care, adaptation and routine – we are living the words.

Imagine existing in a medium-sized motor home, locked in with five other adults for a period of three years. This situation resembles what it would be like if you were on a mission to Mars. This is an extreme situation which none of us are doing anytime soon. We want to share some insights around how “short term isolation” can be an effective teacher as we offer up traits adopted here from the past 7 months and what we learn from early explorers.

Combined, we have over 50 years of experience living close to nature and understanding that the wind is beyond taming – it tames you.

By now we all know about the need to unplug. We’ve learned how the internet and smartphones change our brains: we scan instead of read, we feel the World Wide Web shrinking our attention spans as everything feels like it must happen then and there, we battle fomo -‘fear-of-missing-out’- and we don’t sleep enough. And by now many of us have been caught up in an overwhelm and overload of information with the most used word beginning with “C” which means a threat, and ending with the words “self- isolation”. We have gone from overdrive to idling in neutral with anxiety and uncertainty around what is going on, to a hard stop!

Imagine and understand that we are all on a “Global Expedition” that requires specific behaviour and ways of being that are imperative to a healthy way forward and through this. In this climate/Covid crisis each of us has a very; more critical than ever; very, important role to play as an expedition member. How we do that is individual, yet each behaviour, action and choice we make impacts the collective.

We, Sunniva and Hilde; as an expedition team for Hearts in the Ice; have chosen to self-isolate for 9 months (now it will be likely longer) for the sake of gathering data for science to better understand changes in our climate and bio-diversity. We have chosen this minimal existence to highlight the changes, to educate and to inspire a re-connection to our natural world and to ourselves. None of you have chosen this isolation yet it has now chosen you.

Expedition behaviour is a way of being that can help in challenging times during confinement, hardship and isolation as we all forge a way forward, together.

Time here during the Arctic polar night stuck inside as a storm rages outside, the cold air whipping through the cracks, coming face to face with a polar bear, communication and equipment breakdowns, these defining moments make understanding Expedition Behaviour easy.

It means doing your fair share, remaining positive when everything around you tells you otherwise, it means extending kindness by offering your person a warm drink after they’ve been outside chopping wood, it looks like teamwork, consideration, thoughtfulness, safety for all, love, and is without ego or rank.
Rank and status are irrelevant on an expedition – treating each other with respect and dignity means you leave your ego at the door before you walk in. As many have lost their jobs and identities that go along with that, it is all too easy to feel a lack of worth, that you do not count anymore. On the contrary.

We have read numerous survival stories of early polar explorers that have suffered great fates and emerged stronger. We have learned from them.

Let’s take the Norwegian Fridtjof Nansen, then a young scientist and outdoorsman who was going to test a theory of drift as the far north was covered with ice – the theory was that this ice cap moved in a westerly direction across the Arctic. The genius of Nansen’s plan was to build a ship for the expedition designed to rise up out of the ice as the floes pressed against her hull, rather than to resist the full force of the pressure. This ship was called the “Fram” meaning “onward”. It headed into the Arctic pack ice, where she was intentionally locked in just north of 78º latitude – same latitude we at now. Nansen’s design worked according to plan, and the theory of polar drift was confirmed. When it appeared that Fram’s course would take her no farther north across the polar ice cap, Nansen selected Hjalmar Johansen to accompany him on a dash to the pole with kayaks, sleds, and dogs.
They went as far as they could navigating with dubious charts and were caught by an early winter. They made it to Franz Josef Land and built a small hut out of stones and walrus hides, in which they would live in complete isolation and confinement. The hut was 2 x 3 meters ( 6 x 10 feet roughly). Life was really unpleasant.
For the entire nine-month Arctic winter, they cooked their food and illuminated their world with the small flame of a blubber lamp. Conditions were about as bad as humans can reasonably endure. Their dreams were filled with Turkish baths and visits to clothing stores.

How did the Norwegian polar expedition endure more than three years with scarcely a problem? The primary characteristic that distinguished Nansen from most other polar explorers was that he approached all aspects of expedition planning with scientific precision.
He started by reading accounts of previous expeditions to learn from the experiences of his predecessors.
Nansen remarked in his diary that most of the problems confronting him already had been addressed and solved by previous explorers: wear appropriate clothing, pay special attention to the food, select crew members who can get along, and keep the crew busy and entertained.
He fostered group solidarity with a respectful approach to his crew – all were treated equal and had a voice – during a time when expeditions were managed with one man calling the shots and making decisions.

Most important, Nansen recognised that the physical and psychological well-being of his crew could make the difference between success and failure. “The human factor is three quarters of any expedition,” wrote explorer Roald Amundsen, the first to reach the South Pole.

Nansen and Johansen survived and suffered from the mind-numbing sameness of
their days and the other health-threatening conditions, but emerged from their small den to perform all of the technical tasks necessary to fight their way through pack ice to the safety and comforts of civilisation. The full account of the Norwegian polar expedition is absolutely amazing – worth a thorough read. After three years and three months following the initial departure of “Fram,” Nansen and his crew were reunited and welcomed as if they had just returned from another planet.

Interpersonal problems are inevitable as we all now live in isolation and confinement
with very little opportunity for variety or escape.
Individual compatibility and recognising the need for solidarity are among the key ingredients of any successful expedition, overwintering, and time of crisis.

None of us planned this Global Expedition we are now on, but we are on it. We all, like Nansen, have the ability to find comfort in discomfort.

Adopt Expedition behaviour, inhale fresh air, wonder and curiosity with a splash of love, care and respect for each other and all things. This is not about one of us winning, this is about surviving and thriving collectively.