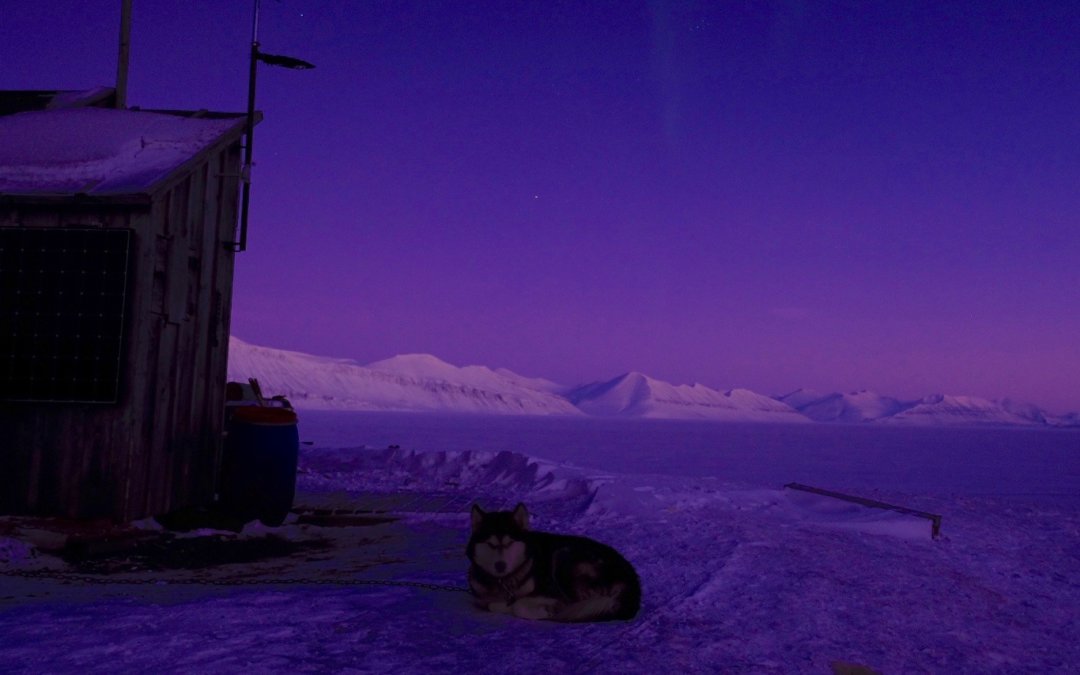 The real voyage of discovery consists not in seeking new landscapes,
but in having new eyes – Marcel Proulx

One of our main goals here at Bamsebu is to “live the experience.” To be in it, fully immersed and live to tell about it. We can proclaim with 100% certainty – we are living it!

Yesterday we could see without a beam of light, a headlamp or night vision binoculars. It was as if we were reborn…new eyes waking up to a vision of soft light from a yesterday that seemed so long ago.
It was on this day we decided to take our snowmobile out for a short ride to the open sea and back. Ettra was to be outside without us for the 1st time in over 2 months. We saw a dozen reindeer, many arctic fox tracks but no polar bear tracks. The entire roundtrip took about 30 minutes. With the beam of light from the snowmobile, Bamsebu came into view. Eyes re-adjusted and to our absolute disbelief, a massive Polar Bear was standing guard directly in front of Bamsebu.

It did not move. Confident. Magnificent. Unpredictable.

Normally a polar bear would make some move at the sight of light or the noise from a snowmobile- but not this one! He did not budge. Our hearts raced with fear as we sped up and drove straight towards the Polar Bear to scare it away- still, it didn’t move. It stood there for a few seconds, no reaction. More seconds passed.

Our worst nightmare?! We cannot begin to describe the horrid thoughts that took over when at first we could not see Ettra! There….there she was ! When we did see her we were metres away on the scooter.She was seemingly intact, no visible blood and about 1.5 meters away from the Queen of the Arctic! Ettra was so scared! Finally, the Polar Bear made a few steps toward the shoreline and tore off. It ran in a direction that was exactly where we had walked just hours before. We know it will be back. That would be just a matter of time. It’s paw prints are all over our food barrels, around the hut and circle Ettra’s place. It is not often a polar bear kills a dog but it happens and as recent as last month.

Yes, we are living the experience here with all of the knowns and unknowns. We have our tools and skills to manage our day to day but there is so much more to do than just “managing”. 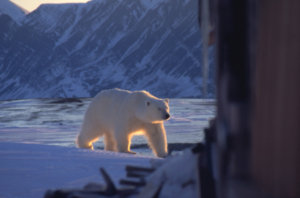 From a previous polar bear visit to Bamsebu.

Another one of our goals with our stay at Bamsebu is to collect and share data for 7 different science projects to help us all better understand the impact of climate change.

In the 128 plus days we have been here we have said yes to a few phone interviews for live radio. One of the many questions asked was “When did you become a Citizen Scientist?”

The answer went something like this “We are both passionately curious! We were introduced to research that was being done to collect data underwater, on land and in the sky and through this became connected with scientists and their projects. It became evident to us and the scientists that we could contribute extremely valuable data over 9 months to enhance our collective understanding around the rapid changes in the Arctic”.

One gentle reminder came from Liz at Nasa when we became “Rocket citizen scientists” – without sparing her words told us that collecting aurora images were “at our own risk”. She knows the cold temperatures and the dangers up here are real. To capture images of the Aurora in the Arctic you battle incessant cold, the kind that can give you frostbite in seconds, we have been close many times. And there is the fact that you expose yourself to Polar Bears. It is so easy to be entirely absorbed by the lights around us. A second or a minute unattended, can mean life or death!

We draw inspiration from 2 remarkable women pioneers. Norwegian Hanna Resvoll-Holmsen, the first female scientist on Svalbard and the first to advocate for protection of the environment both here on Svalbard and mainland Norway. She was fierce and dedicated, known to camp with 2 tents. One for herself and the other for her plants. Gifted as a writer and activist she was skilled at engaging the press in her efforts to protect the natural world she studied and loved so dearly.

American Rachel Carson whose writings initiated a transformation in the relationship between humans and the natural world. Her book “Silent Spring” created such a stir and national sentiment that they remarked “Silent Spring is now noisy summer”! With a public that demanded that science and government be held accountable she dared to speak out and confront the issue of the destruction of nature and framed it as a debate over the quality of all life! An environmental movement grew out of this. She remains an example of what one committed individual can do to change the direction of society. Never doubt the power of one!

Are you someone who, after decades of exploring life’s adventures, had business and familial success under your belt, feel that it’s time to rest, sit back, become an observer and not take so many risks or not challenge yourself? What if you realized and believed that you are just getting started and this time you have such an entirely different sense of what you are capable of? What if?

Such has been the case with us when we started Hearts in the Ice (HITI) – a beautiful evolution as two individuals willing to be vulnerable and see ourselves for who we are today – our perception of us vs how others perceive us. We are just getting started!

Both of us feel like we are strong capable women with a nice mix of tools in our tool box but it wasn’t until we met Carina Vinberg and Kit Jackson that we realized we had so much more to learn and so much more to give.

Full of high’s, lows, yesssss’s and no’s, the journey to get to exactly where we are today has been a twisty, winding road! We had sent out many proposals, sat in countless meetings, sent hundreds of emails and did a lot of asking to create HITI!

It takes a village indeed!

Asking for that help and support has been something that we can say with pride that we have learned much about. This is not about us – this is about embracing our planet! Climate Care.

It takes knowing yourself, what you value, what you stand for, asking yourself why something matters and with conviction sharing why someone else should care too? It took outlining a strategy map of where we want to go- how and why. We wanted to share the 2 resources that are too valuable not to share: Kit Jackson – Strategy Together and Carina Vinberg – Framgångare because we can all benefit from becoming stronger, better individuals and leaders in our own lives.

We were asked when we started this project what we wished for on the other end of this Bamsebu stay?
One answer went like this “We hope that every single person out there understands that they matter and can make an invaluable contribution. We hope individuals would step up to their own leadership abilities, discover a science project in nature they are passionately curious about and become a citizen scientist. Only then will we all embrace the planet!”