Lost and found – and how Hilde won a trip to Greece 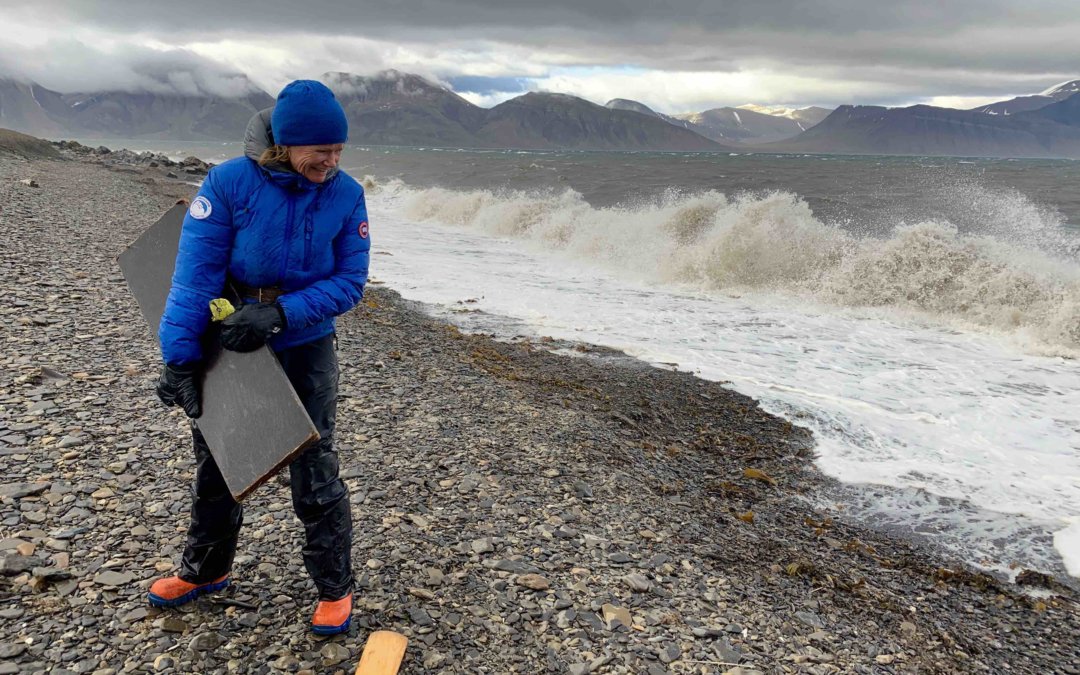 If you want to build a ship,
then don’t drum up men to gather wood,
give orders, and divide the work.
Rather, teach them to yearn for the far and endless sea.

How do you win a trip to Greece? Our 9km runs to the back side near Cap Fleur deLys and in the direction of Recherchfjorden are never without surprise. Our last run was spent looking dizzily over rocks for Sunniva’s Hearts in the Ice pendant, made by Ellen Kvam, that had fallen off somewhere between Bamsebu and the rocky beach at the end of our run. The challenge was on! If Hilde found the pendant (clearly impossible given the amount of rocks on the ground) Sunniva would buy her a plane ticket to Greece.

Many months ago when dreams of travel could be easily realized we were planning to thaw out in Greece by invitation of Betina, the owner of CocoMat in Norway. We were so looking forward to swimming in a warm ocean, feeling the sun on our white Arctic skin, eating seafood and drinking wine by the beach. CocoMat’s HQ is in Greece – they innovate sleep systems and work to inspire a re-connection to nature. Our mattresses, pillows and duvets are all courtesy of them and we have never had better sleep!

Back from our run Hilde bent down to attach Ettra to her line and there under the door stoop at Bamsebu, there it was! As blue and beautiful as ever! It must have fallen off when Sunniva removed her belt and Hilde – well she is heading to Greece soon!
When you know exactly what you have lost, finding it is like Christmas all over again.

We don’t always know exactly what we have lost.
Looking around us here in the VanKeulenfjord – we are surrounded by rich history and an impressive ridge of rock called ‘Berzelius’ that is over 200 million years old and runs from here all the way up to the north side of Isfjorden – about 150km long. You might wonder what rocks have to tell us and why we might care about moving from one epoch to another?
The Earth carries the history of geological events in its rock layers.

Our Earth was formed 4.6 billion years ago but the fossil records show signs of life starting about 3.8 billion years ago. Geologists have broken Earths history down into sections, which are called geological eras, periods and epochs and tell us that for the last 11,500 years we have been in what is called the Holocene epoch which followed the Pleistocene epoch also known as the “Great Ice Age”.

The Holocene epoch we are in has also been called the ‘Garden of Eden’- where we had been able to maintain just the right amount of carbon dioxide in the atmosphere, acidity in the oceans, coral in the sea, tropical forest cover along the equator and ice at both the north and south poles to store water and to reflect the sun’s rays. All of this to support human life and a steadily growing global population. The balance between all of these has determined our climate and ultimately our weather.

Many scientists believe that our ever-increasing consumption, and demand for energy, land and water is driving a new geological epoch: the Anthropocene. Anthropo= ”man” and Cene = “new”. We are living in an age of rapid and unprecedented change that is being referred to as “the Great Acceleration”. We are at that time when our planet is in trouble and needs us. All of our systems are out of balance and mother nature has no more stretch to keep things stable. She is exhausted – literally and figuratively.
To borrow words from Sylvia Earle: “What we do right now, or fail to do, will determine the future – not just for us, but for all life on Earth” .

Think of it this way – just as the human body is a system of organs and systems, each of which has certain optimal operating conditions, the same is true of Mother Nature and she is definitely not doing well. We do not know exactly how to cure her but we do have science, data trends and facts to help us understand her vital organs and one of them is climate change.
The climate system determines the growth environment for all living species –it is now threatened to the point where it can become a hothouse in a way we have never before experienced. For the first time one species-ours- has become a force on nature.
Our way of life as we have known it is in danger. There is no hiding the fact that we cannot continue to live the way we all have been.

It has been said that we are losing between ten and 100 species per million species in one year. Mother nature has a bad fever and we need to take care of her.
But we must never give up, never doubt that every step that we take towards discovering exactly what we have lost, is worth it.
Without optimism we would have never recovered all of the items ripped by the wind and the ferocious seas.

Two days ago, on an unusually calm morning we pulled on our orange survival suits (thanks Hansen Protection) dragged our little yellow boat into the water and set up the anchor and pulley 15 metres off shore. We were amazed that after so many months of being frozen our Evinrude engine started on the first pull! We had a great boat ride, collected phytoplankton for Fjordphyto and found some as yet indescribable small organisms. Time to pull out the microscope!

Eight hours later we were in a violent storm – winds gusting 24m/s, high tide and seas churning with swells that sprayed our windows with salt water and seaweed! Little yellow filled up like a bathtub, both oars and seats gone! Later that day we walked along the shore … there to our great surprise, 2 oars and both seats! We also realized that one of our blue NOFI food barrels were gone. Noooo!!!! Hilde took Ettra to the nearby bay and there it was! Tucked behind the only log on the beach! Are you kidding me? Are we that lucky? Sometimes we are. 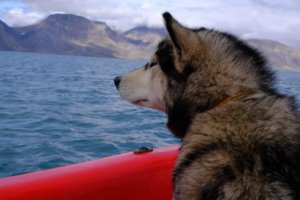 Nature and her forces are to be respected and understood. She surprises, heals and restores us in ways so deeply personal and profound. We all have the opportunity to re-learn, re-think how we move, what we do, how we engage with each other and we need to do it with heart, curiosity, collaboration and optimism.