Ripping off the veil of ‘Unconscious Bias’ around what is possible! 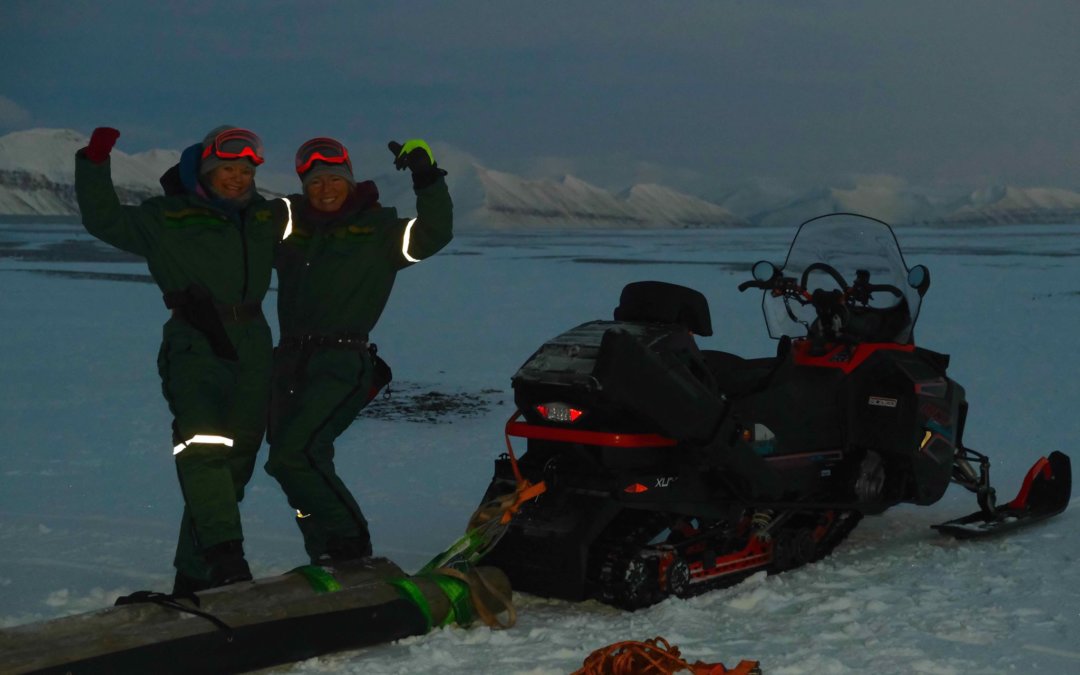 “How in the world can two women survive an overwintering alone together?” a question that a friend of Hilde’s asked her not that long ago. This might be perhaps a question many ask. And of course there are many stereotypes that enter the scene of this conversation. Perhaps there are many that think we are out here clawing each others eyes out? Well, that hasn’t happened yet!

We have to wonder what curiosities and questions would arise if two men would be overwintering here together? That is more than likely not a question that would be asked. To “overwinter” through the three plus months of a long polar night and to be a trapper has traditionally been a male endeavour.

Times have indeed changed. Times are indeed changing. To be living in a time when history can be made and effectively rewritten is indeed a privilege. One that we humbly embrace.

And here we are two women on the forefront of change. Not just on the front of climate change but on the forefront of history. While no women have overwintered on Svalbard without a man before, many have made their mark in bold ways, have written history for us and paved the way. We stand on the shoulders of pioneers like Wanny Wolstad, Helfrid Nøis, Christiane Ritter and Leonie D’Aunet.

There was a time when there were not that many alternate ways to make a living. Today with so many choices, we can easily become complacent. The book by Wendell Berry comes to mind “ What are people for” stories of our evolution from a need to live off the land to a time of automation. For Wanny Woldstad and other pioneers it was clearly a formidable undertaking to live a “Trappers life“. The contrast from our regular lives to the life we are living today is much greater. No running water, no electricity, no stores, no neighbours. Stripped of all the knowns and comforts to live a life of utter simplicity. It has been an eye-opener for us to realise how much extra we live with. So many choices. Too many choices.

Perhaps it isn’t so unusual that it is not common for women to live a nontraditional life. When Sunniva and her three expedition partners – Ann Bancroft (HITI advisory board member), Anne Dal Vera and Sue Giller skied to the South Pole in 1993 – the first women’s team ever- they did not get one corporate sponsor to support the project. It seems that when women do something very risky there is not much willingness to be a part of it for fear of failure or death. The historic AWE – American Women’s Expedition became the largest grassroots undertaking of its kind – the power of the people! We seem to be living in a similar time today. Individuals are exercising the power of their voices and women are breaking the “glass ceiling” and the “ice ceiling” over and over again.

We still have to defy the stereotypes and perhaps more importantly lean in, stand up and stand together. Typically when men engage in something death defying – the commercial entities seem to clamour around with sponsor opportunities. As women we still have to fight harder, but slowly we are changing the rules. We are two capable women that are working hard to promote collaboration rather than competition.

Hilde remembers the first time that she heard there was a female pilot onboard her plane and Sunniva remembers the first female CEO she met – both professions that have been traditionally male dominated. Badass women are everywhere! We are pilots, Governors of Svalbard, Prime Ministers, CEOs, Presidents, adventurers, mothers, sisters and daughters.

So – back to the question. “How in the world can two women survive an overwintering alone together”? Because we are both women – we can handle this overwintering with strength, courage, grace and ability just fine. We have our health, our individual and collective strengths. We have a strong foundation of family, friends and supporters, a formidable network of sponsors and research partners and we have each other.

We also have a deep willingness and desire to grow and learn from each other and through this massive undertaking at Bamsebu. Thanks to structure, tools, feedback, coaching and a lot of support from Kit – Strategy Together and Carina from Framgangere we feel this sense of purpose to no longer procrastinate on life’s pressing moments and issues of our time. Through collaboration with them we have learned more than we might want to know (said with a wink!) about our strengths, shortcomings and perception of ourselves. With guidance and insights we have been able to shape our strengths as leaders and communicators. It has been an enormous learning process and a humbling one. It is on-going!

There are many challenges living so tightly together here at Bamsebu in harmony with the company of wildlife like Polar bears, Reindeer and the open expanse around us, without distraction. Far, far away from people. Everything from our habits, personalities and expectations get challenged. Regardless of where you stand on the identity scale- jealousy, competitiveness, ego all factor in. We had to leave our egos at home.

We have had many talks, shed tears and had moments of utter surrender to the elephant in the room. We are so exposed and therein lies our beauty! In this space of sheer vulnerability we have the willingness and ability to grow. There is nothing better than collaboration and our belief is that nothing is stronger than women supporting each other. It is a fact that many of our supporters, partners and sponsors are women. But we are so fortunate to also have many amazing men behind us including both of our CEOs Daniel S. from Hurtigruten and John M. from Polar Latitudes.

A strong testament to female collaboration around climate change, Hearts in the Ice and Homeward Bound join together at the ends of the earth. In early December we, Hilde and Sunniva, will join in on a satellite call with the leadership from Homeward Bound as they journey to Antarctica. Stay tuned for updates.

We wanted to call out to some of the amazing women who have been such strong supporters for us both personally and for Hearts in the Ice. Together we are all stronger and from the bottom of our hearts – we thank you!